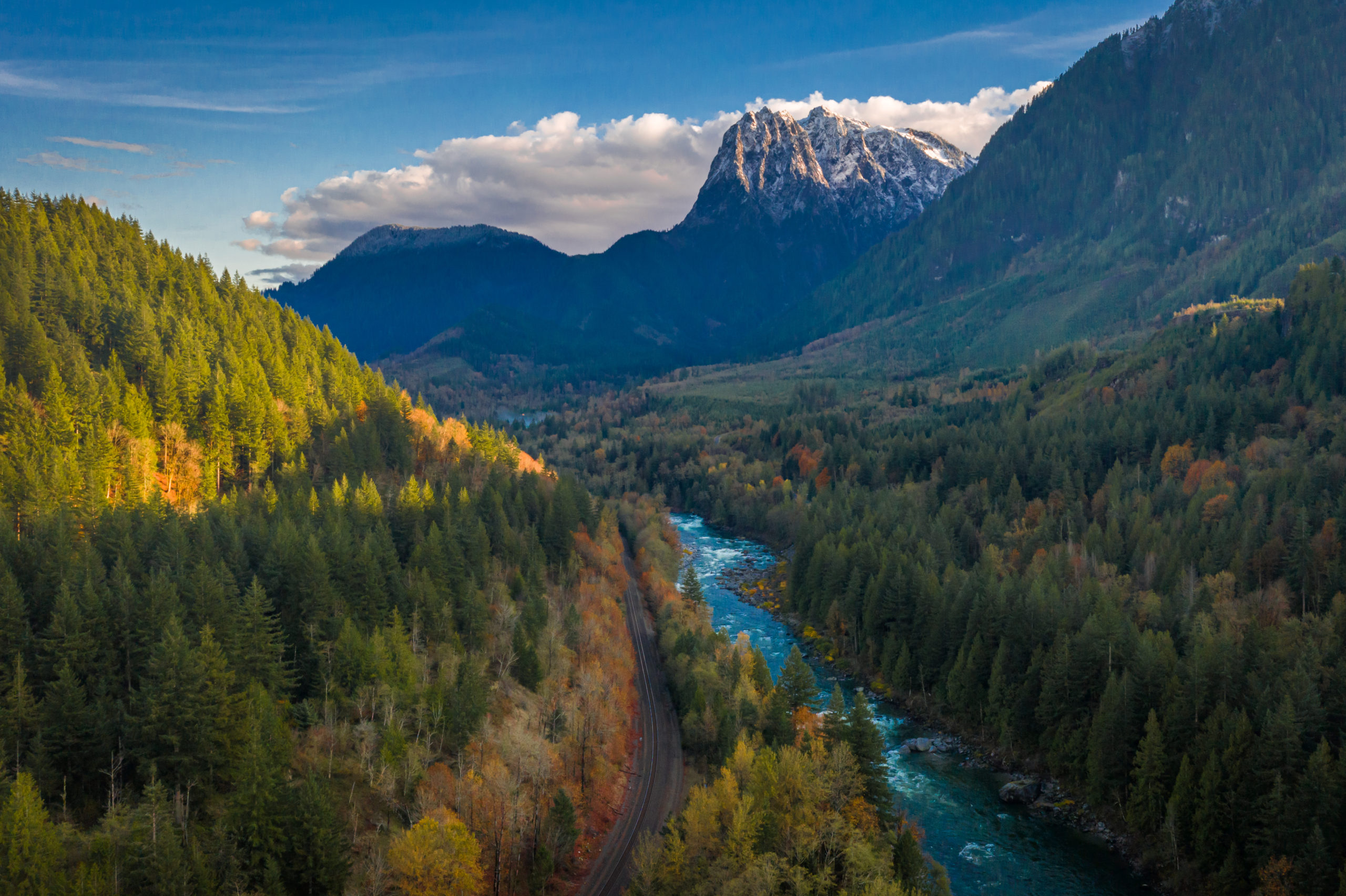 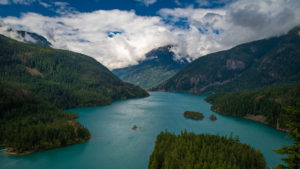 The Cascade Loop Scenic Byway in Washington State is not so much a road trip as an experience, a larger-than-life 440-mile adventure. The Babe Ruth of byways, Cascade Loop provides an antidote to nearby Seattle’s urban-ness despite the proximity. Its creeks simultaneously rush and implore the traveler to slow down; its pure breezes from somewhere beyond refreshing more than the body.

Recreation? Check. One can paddle her kayak noiselessly across Diablo Lake’s endless teal, surrounded by evergreen protectors. Natural beauty? Check. Admire a knoll of wildflowers backed by ice-encrusted crags that have not yet received spring’s living invite. Culture? Check. Dust off your lederhosen and enjoy a pint and pretzels in the Bavarian downtown of Leavenworth.

As you cross the stone-strewn Skykomish River on your way to the coast, you may sense that a rusting bridge in these parts is more than inanimate old 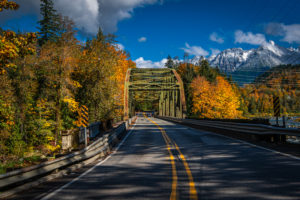 steel. The decades have scarred it, but it is not defeated as much as nostalgic. As a taken-for-granted connector, it has witnessed many moments. It has allowed a stuffed animal-clutching girl to peer out from the back seat on her way to grandma’s house, eyes wide with anticipation. A honeymooning couple to gaze in wonder at the backdrop of soaring peaks from their rented convertible. Proud grandparents trundling across in an RV, introducing their grandkids to the wonders of a multigenerational road trip.

As the day concludes, visit Admiralty Head Lighthouse at Whidbey Island’s Fort Casey State Park, consoled in its loneliness by the low sun’s golden glow on the nearby sound. Then, wait for the smorgasbord of stars to appear, more limitless than words in the dictionary – and resisting description from every single one.

Need a break from daily stresses? Ohio’s Amish Country Byway – where simplicity is not just another romantic concept but the defining mantra of life – may be just the ticket. Country roads crisscrossing Holmes County are roughly equidistant from Cleveland and Columbus but couldn’t be more different from Ohio’s urban strongholds.

When driving the Byway, the word ‘charm’ keeps coming to mind. It’s such an appropriate word to describe the experience that you’ll even see it appear on a sign. You’re not hallucinating. The tiny community of Charm is home to a handful of restaurants, gift shops to browse, and of course, the charisma its name suggests.

One of the Byway’s highlights is a visit to Guggisberg Cheese, home of the original “Baby Swiss”. Immigrating from Switzerland in the 1940s, Alfred and Margaret Guggisberg established their 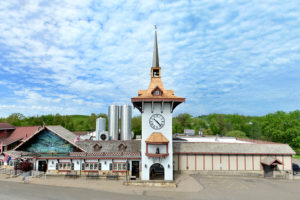 Ohio facility in 1950; the cheese is so exquisite that it won U.S. first prize in 2019, out of over 2,500 entries from 35 states! Today you can tour the factory and, of course, take home some
championship cheese of your own.

Millersburg is the Byway’s anchor village and feels a lot bigger than its population of 3,200 would imply. As Holmes County’s seat, it maintains a quaint small-town feel despite the solidity of its historic brick and stone buildings. Stop here for lunch, a brochure at the Holmes County Tourism Bureau, or a glimpse at the mesmerizing Millersburg Glass Museum.

Returning to rural landscapes, views of gentle, tree-specked hills roll away like a dream as you listen to the timeless clip-clop of traditional buggies sharing the roadway. The Amish Country multicultural community life depends upon and draws from the Byway, its path forged and designed by early settlers.

As you honor local culture, realize you are visiting a settlement where one of every six Amish lives worldwide. With fervent religious convictions to ground them, the Amish way of life enriches and influences the entire community and those who visit. As you’ll quickly learn in these parts, simple does not equal boring.

Tracks Across Borders. As a noun, tracks can refer to footprints or impressions made by someone who has passed. Something that has already happened. A legacy. The phrase “making tracks,” however, implies progress rather than history. A swift and inspiring departure for something new. Here in the Colorado/New Mexico borderlands, this relatively new Byway is rooted in both history and the future. 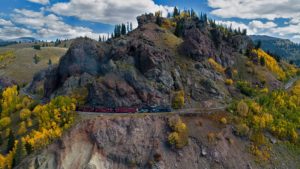 Departing from the mountain mecca of Durango, head east in the path of the nation’s largest (and Colorado’s first) narrow-gauge railroad, introduced in the 1880s. Its tracks are infused with history, as they connected not only two cities but two nations, the Southern Ute in Colorado with the Jicarilla Apache in New Mexico. While the heyday of freight along the railroad’s San Juan Branch ended in 1935 and daily passenger service in 1951, the Durango-Silverton and Cumbres-Toltec Lines continue today for presenting travelers both local history and mountain majesty.

You may also want to leave your tracks in the shadow of Chimney Rock. This 315′ rock formation pierces the sky, but there’s far more to see here. Once inhabited by Ancestral Puebloans, the accompanying archeological site was added to the National Register of Historic Places in 1970 and designated a National Monument in 2012. Visiting is a fantastic way to appreciate Native American history while trekking through uplifting mountain landscapes. 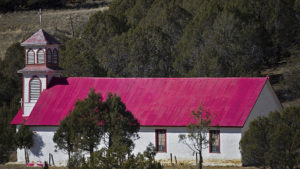 The drive concludes in the New Mexican village of Chama, population 1,000. So much of what you’ve done has paid homage to the history of these western borderlands. In Chama, dine on ‘New Western Cuisine’ at LOCAL. Grab some fresh-brewed coffee and a pastry on the patio of Rio Chama Espresso, and perhaps examine where some movies – Wyatt Earp (1994), Wild Wild West (1999), Hostiles (2017), to name a few – were filmed in the area.

On this Byway, you can simultaneously appreciate the tracks of the past and push confidently toward the future. Perhaps you’ll discover that both are interrelated. By better understanding the past, you position yourself for richer, more dynamic tomorrows. With proper appreciation and preservation, these stunning landscapes will be enjoyed for generations to come.