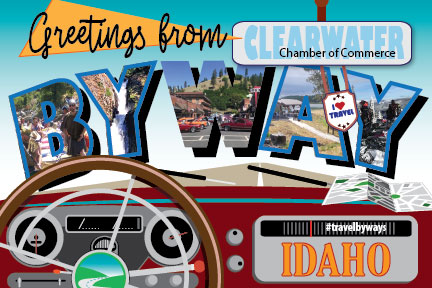 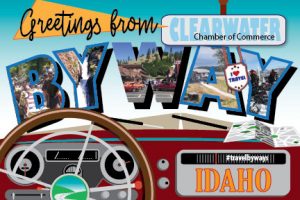 Well, this first Byway winner is a group of Byways winning thanks to the Clearwater County Chamber of Commerce. How did they win, you may ask? The National Scenic Byway Foundation held a drawing to choose twelve Byway Members who either joined new or renewed a past membership for 2023. If you joined before the deadline of December 18th your Byway Membership name went into the hat to be drawn out on Facebook Live on December 20th. The twelve winners will be featured here on Byway Journeys; receive some cool posts on Facebook and Instagram, a press release, and a custom graphic using their photos.

Let me introduce you to our January Showcase Your Byway Drawing Winner. Vast wilderness, pristine rivers, deep canyons, and rolling hills await you in Clearwater County – sound appealing? Let me go on; acres of alpine forest with sprawling meadows beg to be explored. Over 300 miles of winter trails make this a mecca for snowmobiling. If you have an appetite for outdoor recreation and scenic beauty, you will find it in the communities that make up Clearwater County. 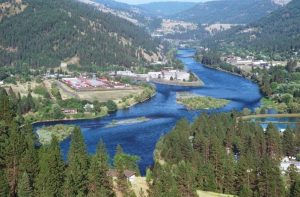 Let’s start at the beginning. The Nez Perce Tribe called these lands home for thousands of years. Their ancestral homelands were rich with natural resources, wild game, and plants to sustain them. The fresh waters were teeming with fish while bison, deer, and elk roamed the meadows providing ample game for the tribe. Called the Nimíipuu in their language they were economically and culturally influential, interacting with other indigenous nations from the shores of Oregon to the high plains of Montana and parts of the Great Basin in southern Idaho and northern Nevada. The Nimíipuu were the eminent breeders of the appaloosa in the 18th century. 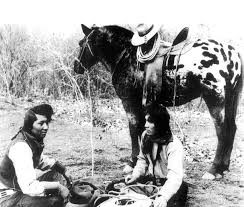 It hasn’t been that long ago, relatively speaking, that this region was discovered and opened up for European settlers. Enter Lewis and Clark who were struggling to get over the Bitterroot Mountains. Hoping to avoid starvation Clark, who had gone ahead to hunt, found a small camp on the edge of a camas-digging site now referred to as the Weippe Prairie. The Nez Perce were kind to the white explorers and made them quite comfortable.

Lewis and Clark spent more than nine months building canoes in the region, noting flora and fauna, and interacting with the Nez Perce while preparing to return home. On June 24th they successfully got over the Bitterroot Mountains and were on their way home.

The Gold Rush, I wasn’t here for that, really kicked things up a notch here in Idaho. Captain E.D. Pierce heard that gold could be found so here and a small group of men illegally entered the Nez Perce Reservation where Pearce noted “they found gold in every place in the stream, in the flats and banks…” This began a rush to seek riches, where a man could make up to twenty-five dollars or about two ounces of gold a day, that lasted for up to fifteen years.

The great Northwest is renowned for the outdoor recreational opportunities where rivers are at the heart of the fun. The Columbia River once carried the Lewis and Clark exploration team, today carries boating enthusiasts outfitted in North Face and NRS gear while sustaining themselves with high-performance granola bars and Powerade. What a difference! The challenges facing the explorers of the 1850s are the same challenges that today’s adrenaline junkies thrive on in Clearwater County.

Clearwater County can offer similar thrills that met the Lewis and Clark crew or the luxuries you have come to expect from the modern world. Dining options are abundant. You can hunt and gather here or enjoy an eclectic collection of dining options across the region. Local eateries prepared great food and serve up atmosphere with Idaho hospitality. 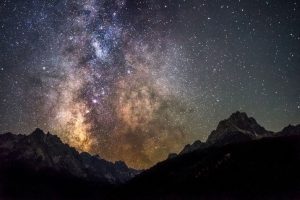 At night you can lay under the stars gazing at the beauty of the night sky, lay your head on a downy pillow, seek out the casino, and stay up all night enjoying the gaming and live entertainment. Surrounded by the history of the “Gold Rush” and the serenity of nature, these charming towns are brimming with character and stories to be discovered. I would bring the whole family and enjoy a week walking through history and making some history of our own.

Near the quaint town of Elk River, there is a Giant Red Cedar (about 3,000 years old) that one can certainly stand in awe over. This tree has heard many stories and played the awesome backdrop for many lovers’ embraces, hunter’s dramas, and maybe a comedy or two. You need to stand in the majesty of this incredible tree.

The Nez Perce Clearwater National Forest is so beautiful that I swear I can hear the sweeping soundtrack from an Oscar-winning movie cue up in the background as I look across the ocean of clouds in the valleys. The Forest offers year-round recreation to go along with the abundant beauty.

The Dent Bridge is a 140 Ft. suspension bridge uncommon in a pristine wilderness where I recommend a selfie. Find a safe spot from a viewpoint that overlooks the expansion across the North Fork of the Clearwater River. 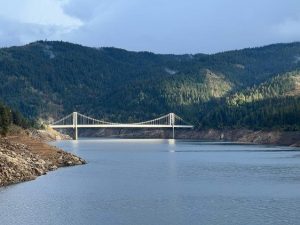 The Weippe Discovery Center will shed more light on the Lewis and Clark expedition while they spent time in Idaho. You will find displays that are interactive as well as informative. There is a lot to see in the Discovery Center space and a library offering computer and internet access.

Bald Mountain is a small but action-packed alpine skiing experience. Surrounded by the vast Clearwater Mountains along the Gold Rush Historic Byway in North Central Idaho, the fun can be found on the way, while you are here and on the way back to your lodging.