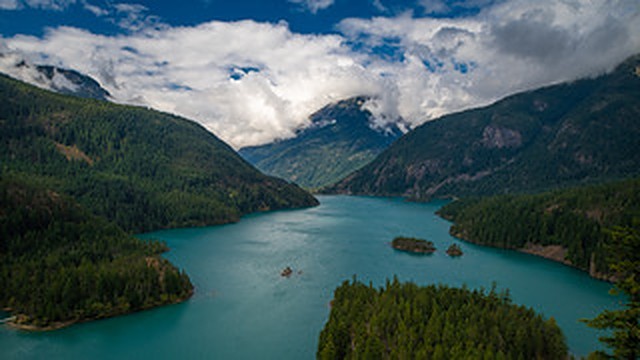 The alpine landscapes in North Cascades National Park on the Cascade Loop is less than three hours from Seattle. Jagged peaks crowned by more than 300 glaciers loom over cascading waters in forested valleys. It is also a landscape that illustrates the effect of the Earth’s changing climate, with changes occurring daily. Yet glistening glaciers are still the most striking mountaintop feature of the North Cascades. In one of the snowiest places on earth, glaciers build when more snow accumulates in winter than melts or evaporates during the following summer. When the snow compacts into ice, it slowly moves downhill, gouging and scraping the steep mountain landscapes as it goes. The mountains rise steeply to 9,206 feet at Goode Mountain and fall to as low as 400 feet on the valley floor along the Skagit River. Runoff from the glaciers and show have formed over 300 lakes and ponds that flow thousands of miles into the Skagit, Stehekin and Nooksack rivers. As you explore the Park, you’ll see variations in elevation, soil types, rainfall and exposure that combine to form eight distinctive life zones from the lowland forests and wetlands to the alpine peaks and glaciers.